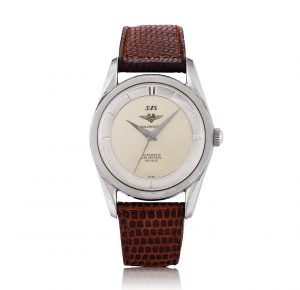 The SAS Polarouter to be sold by Sotheby’s

An SAS Polarouter is set to be sold by Sotheby’s in their Important Watches sale in Geneva on 13 November 2018; the first time, to my knowledge, that one has been sold at a major auction house. It therefore seemed like the right time to try to separate fact from fiction, to summarise what we know about the landmark Polar flights in 1954 and to highlight how little is actually known about these rare watches.

SAS had actually completed the first polar flight in a commercial airplane in November 1952, after receiving delivery of its first Douglas DC-6B earlier that year. The Arild Viking had flown from Los Angeles to Copenhagen in a little under 28 hours. Although SAS had overcome the technological and navigational issues to be able to undertake such a flight, it was to be another two years before they obtained the necessary permission from the aviation authorities to fly passengers commercially on a scheduled route.

It was the Arild Viking that was set to make the first trans-Arctic passenger flight in November 1954, however a fault in its air conditioning system meant that it was replaced by another DC-6B, the Helge Viking (OY-KMI). 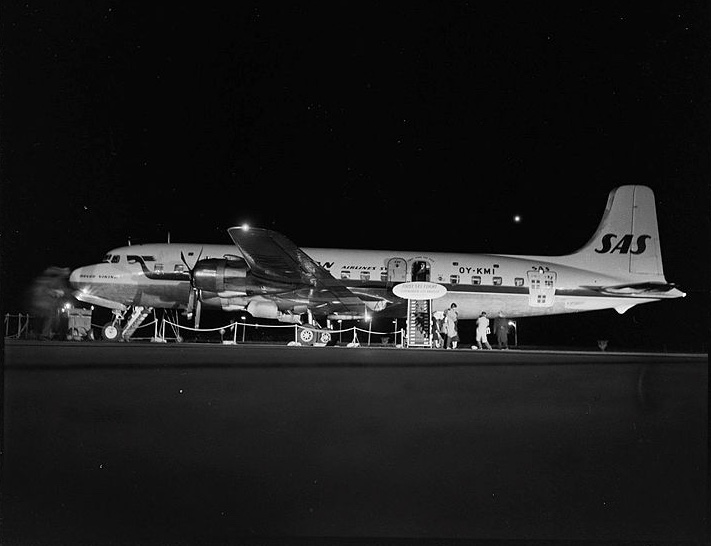 The Helge Viking preparing for take-off from Copenhagen

The inaugural passenger flights on this important route were a huge news story worldwide. The Helge Viking was to fly from Copenhagen to Los Angeles via Söndre Strömsfjord in Greenland and Winnipeg in Canada. At the same time, another DC-6B, the Leif Viking (LN-LMP), was to fly the same route in the opposite direction, with the planes passing each other near the North Pole. 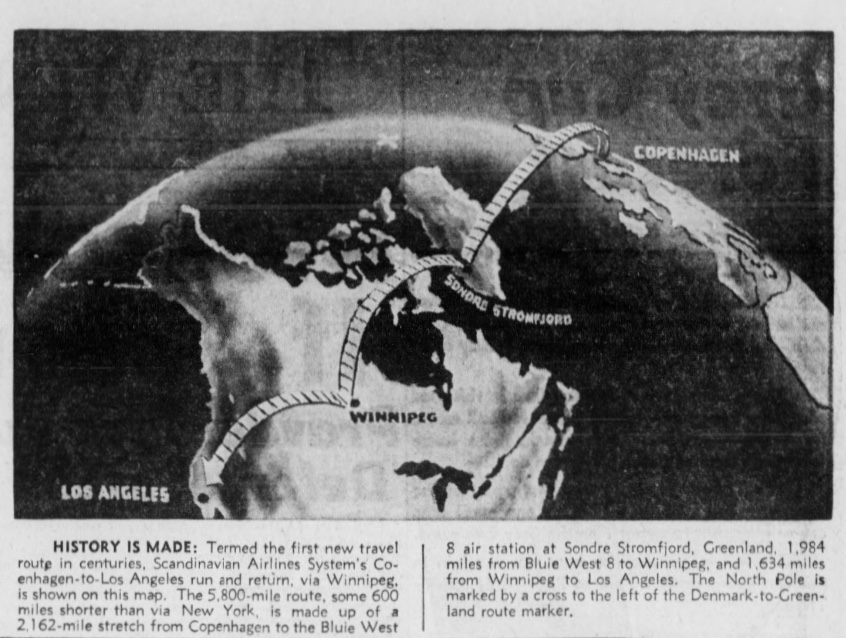 Illustration showing the route taken from a newspaper at the time

The Leif Viking was actually renamed the Royal Viking for the occasion and christened as such by Cyd Charisse, the famous American actress, before leaving Los Angeles. 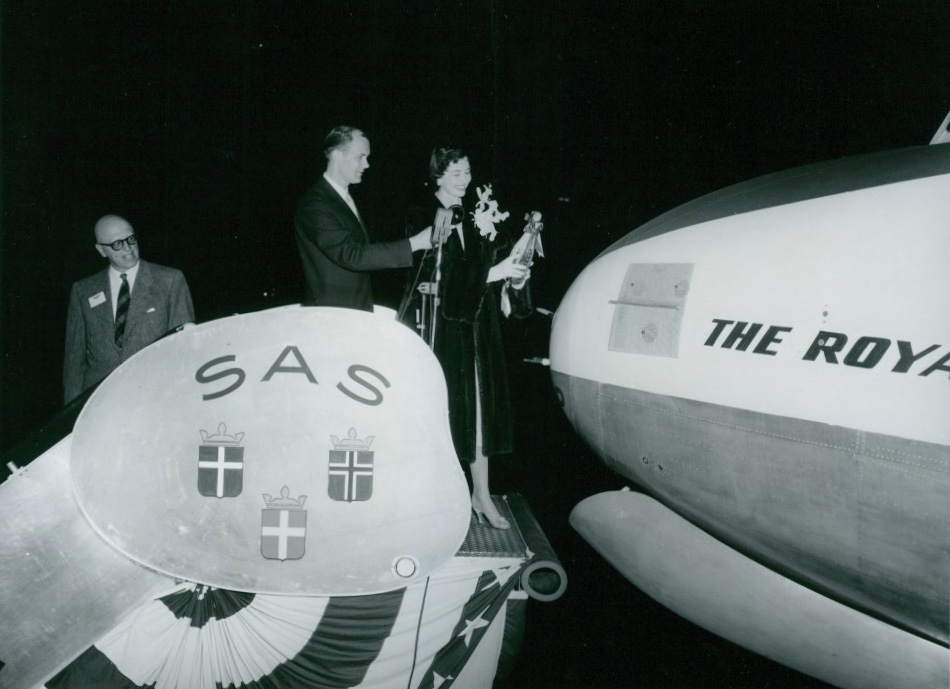 The Helge Viking left Kastrup airport in Copenhagen on 15 November at 8.10pm (local time) with 32 passengers and twelve crew. A DC-6B would typically have a crew of two pilots, two navigators, two flight engineers and three cabin attendants but the crew had presumably been bolstered to look after the illustrious passengers. On board were Prince Axel of Denmark and the three Prime Ministers of the Scandinavian countries as well as senior SAS officials and journalists. 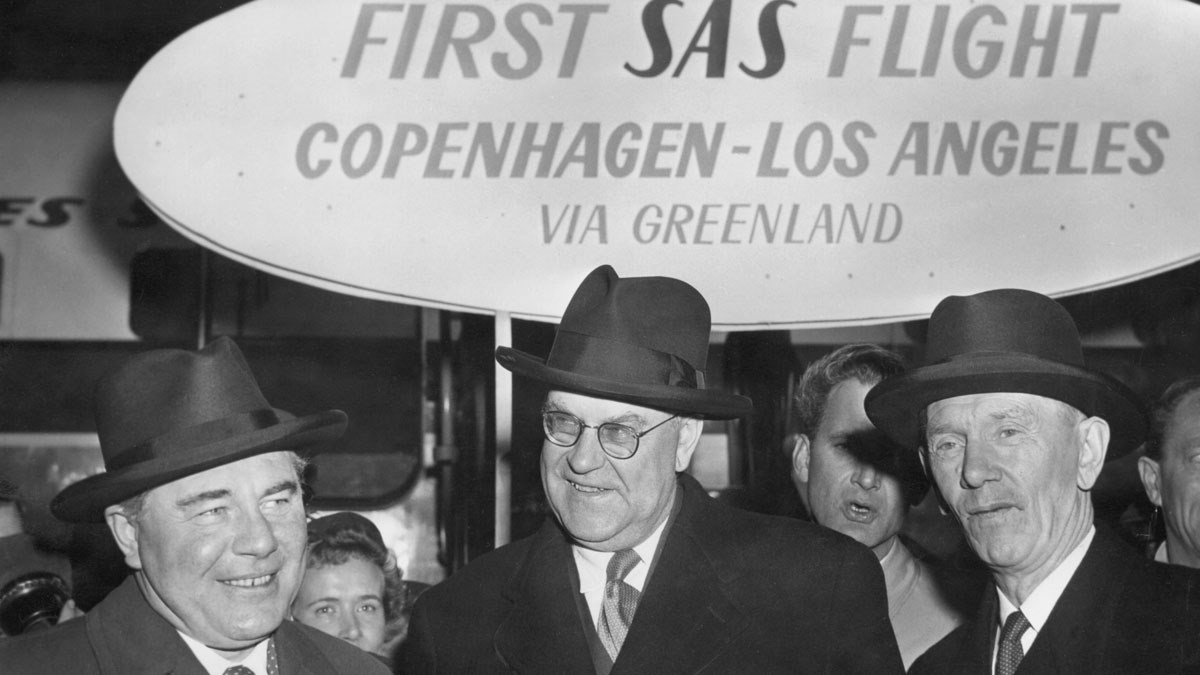 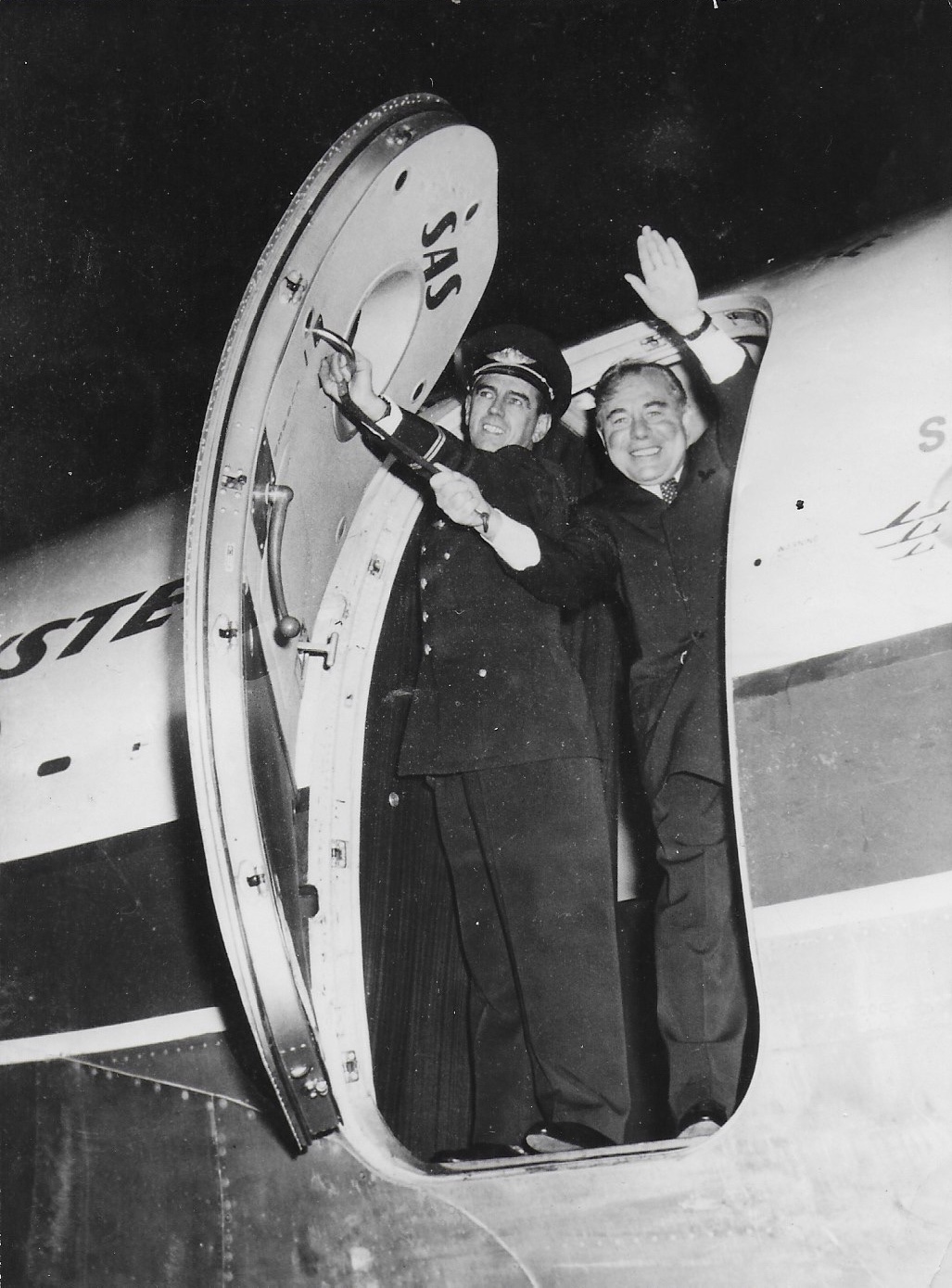 The Helge Viking was captained as far as Winnipeg by Poul Jensen, where Mikal Aschim and a new crew took over. The flight arrived in Los Angeles just over 27 hours after leaving Copenhagen, at 2.18pm (local time) on 16 November. A large marble plaque was presented to the city of Los Angeles to commemorate the flight and the plaque is still displayed to this day outside the LAX Flight Path Museum. 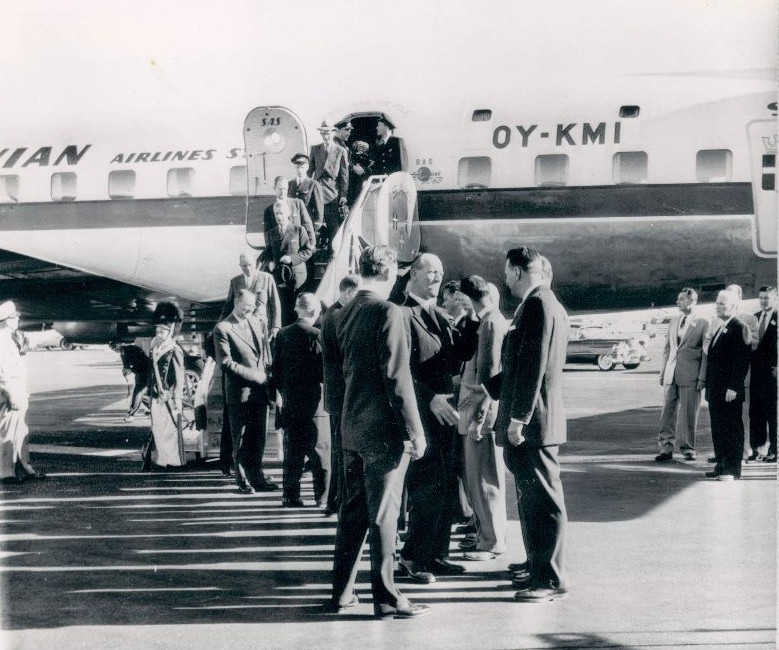 Meanwhile, in Los Angeles, the ‘Royal Viking’ had departed from Los Angeles at 12.20am (local time) on 15 November with 32 passengers and only six crew; two pilots, a flight engineer and three cabin attendants. The passengers included Norris Poulson the Mayor of Los Angeles and the actors, Walter Pidgeon and Jean Hersholt. 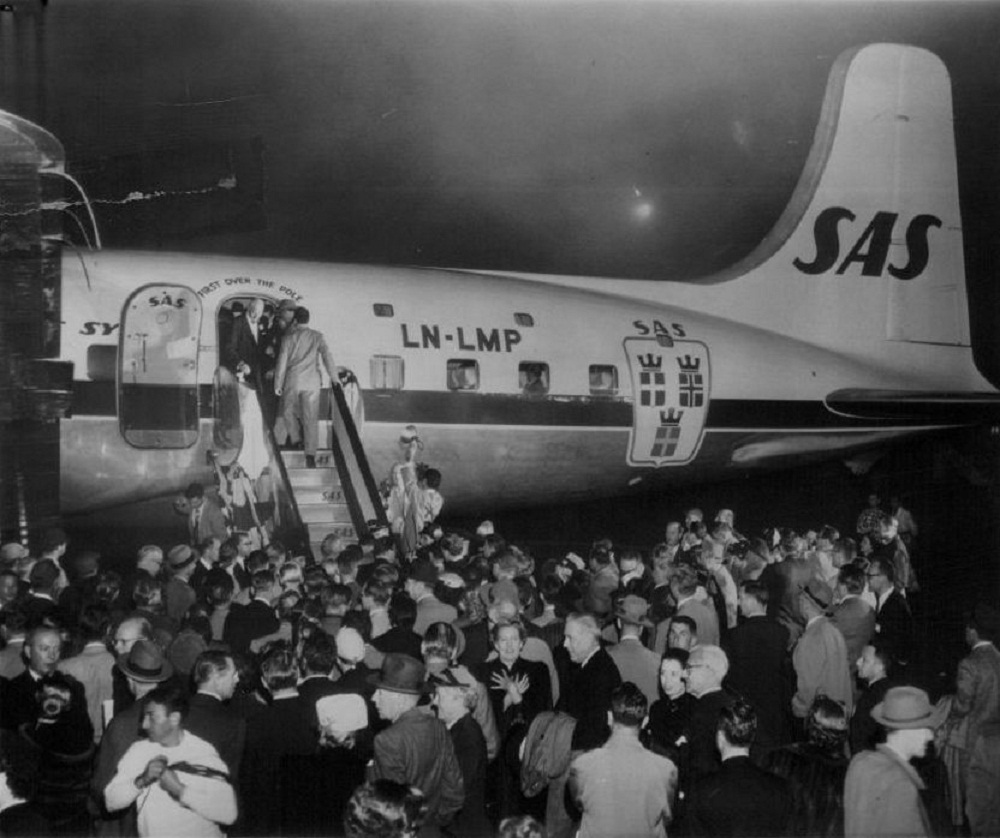 Captain Sven Gibson guided the airliner from Los Angeles to Winnipeg where, for the trans-polar leg of the journey, the crew were joined by an extra flight engineer and two navigators. The passenger list was also extended with five Canadians joining at Winnipeg including George Mahler, the Canadian Transport Minister. The Royal Viking arrived in Copenhagen at 9.18am (local time) on 16 November, a little under 24 hours after leaving Los Angeles. 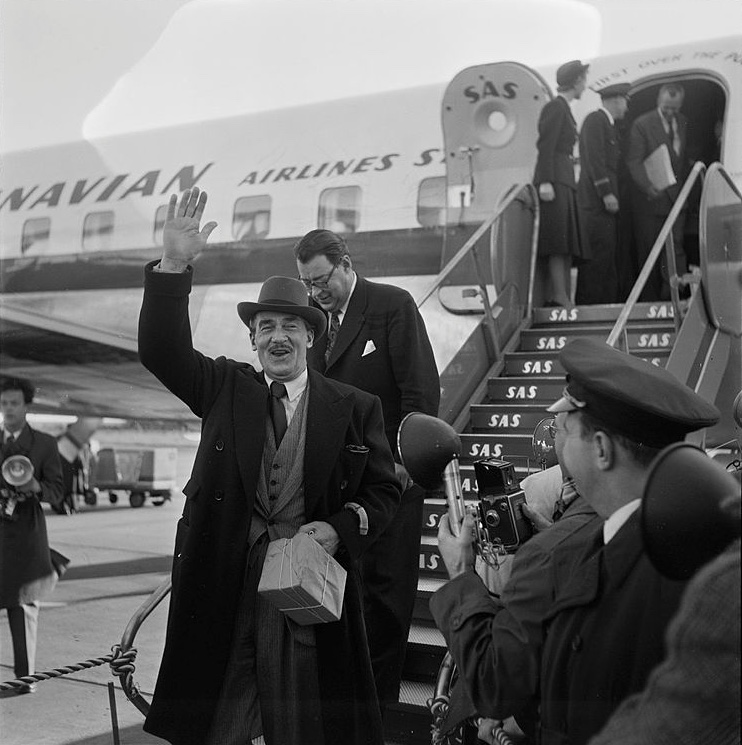 The arrival of the charismatic Walter Pidgeon at Copenhagen

Very little is known about these watches. Universal Genève have not retained detailed records and SAS, both within head office and its museum, know very little about the relationship with Universal Genève. As a result, much of the remainder of this article is speculation based on the little that we do know and I make no apology for that. 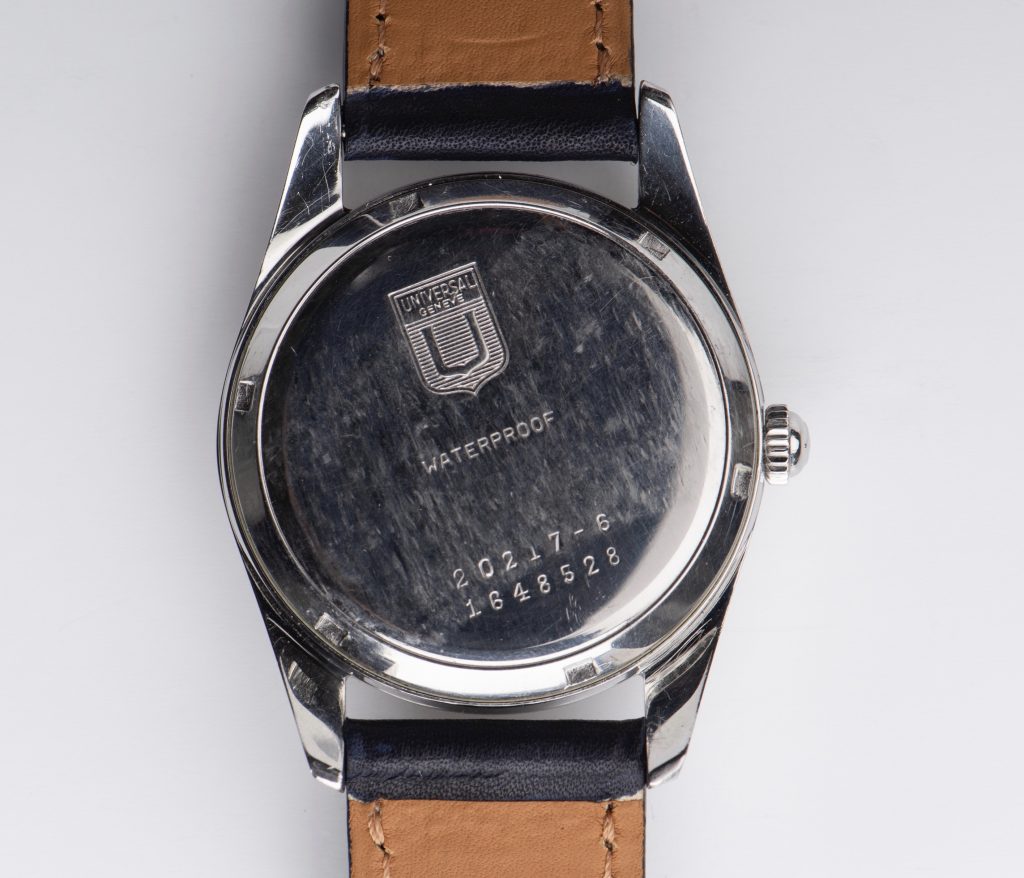 A very small number of these Polarouter watches with SAS logo printed on the dial are known to the market. Unsurprisingly, some have been handed down from family members who were members of the crew on these historic flights, which is significant as this helps to provide provenance. I know of only eight SAS Polarouters with a case reference of 20217-6 and with serials in a very narrow range from 1’648’528 to 1’648’639.

The image below, which was presumably a Universal Genève publicity shot, shows SAS crew members admiring their new watches. The partially obscured aircraft registration number identifies this plane as the Royal Viking i.e. the plane that departed from Los Angeles. We will perhaps never know when and where this photograph was taken but if it was taken during the inaugural polar flights, I would suggest it was taken during the stopover at Winnipeg where a crew change took place, as there appears to be two sets of crew members. 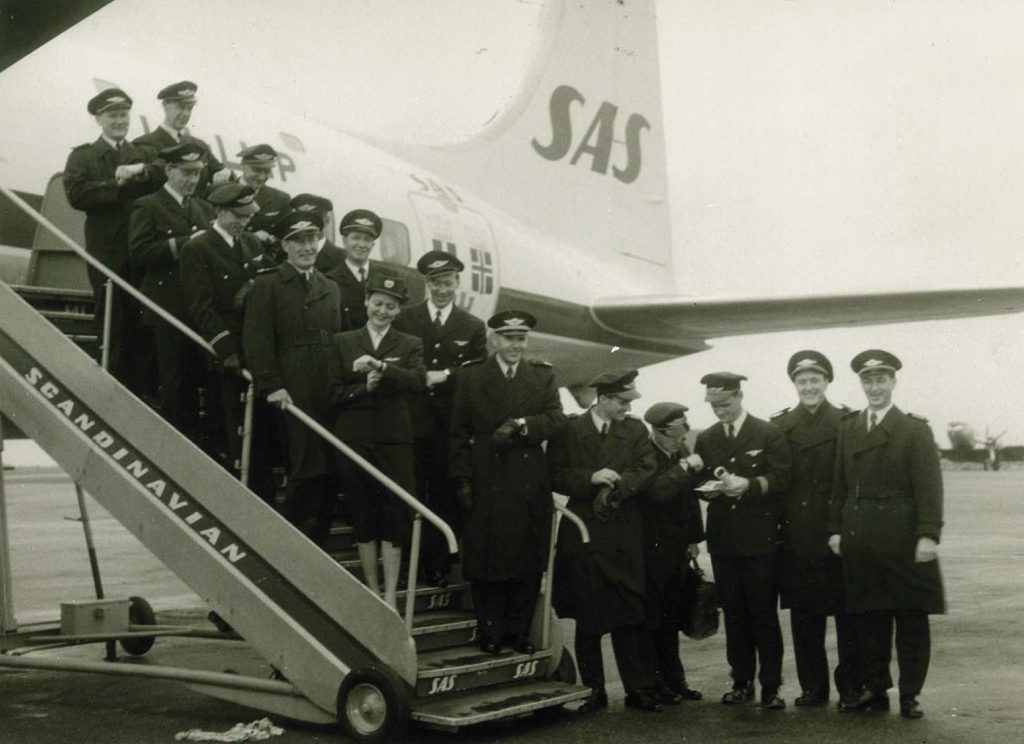 The next image is the only other image I know of where SAS crew members are making reference to their watches. Again, it was a Universal Geneve publicity shot that went on to be used in Polarouter advertising. I believe it is the crew of the Royal Viking, who seem to have only just received their watches and so there is a possibility that this photo was taken indoors shortly before departure from Los Angeles, although I would not be surprised if the photo was taken shortly before or after the photo above was taken. 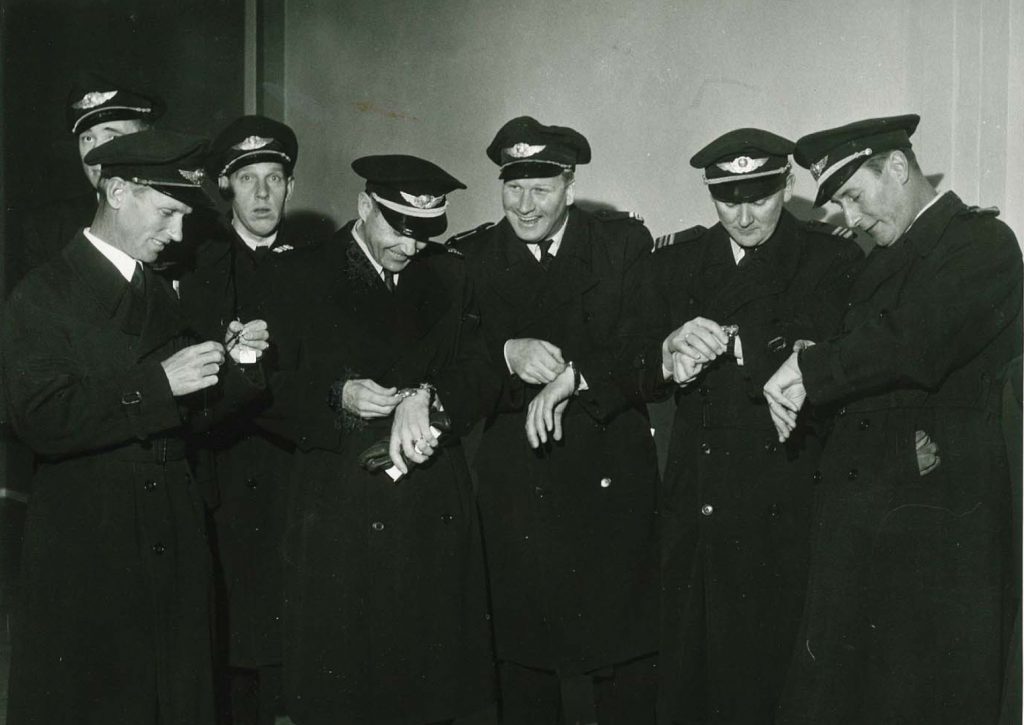 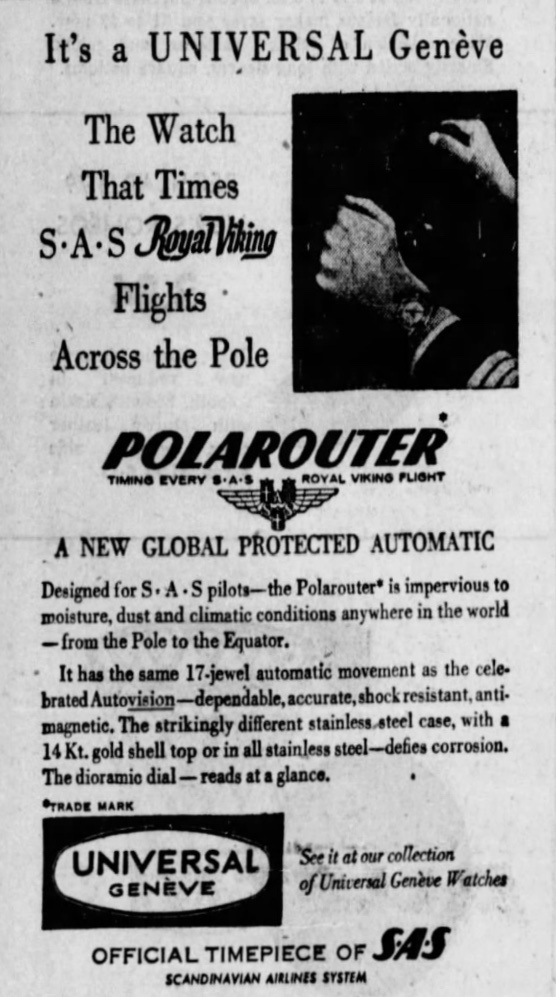 An advertisement for the SAS Polarouter placed on 17 November 1954

It is interesting to postulate about how many of these commemorative watches were issued. Each plane had up to twelve members of crew but we know that there was a change of crew en route. This would suggest that up to 48 watches were issued. It is possible that watches were given to ground crew although I think this is unlikely given the cost and the fact that the purpose of the watch was that it was supposedly designed to resist the magnetic forces that the crew would experience during the flights. It is also possible that watches were given to other passengers such as SAS officials, although there is no evidence to support this. It is difficult to draw any conclusions from the serial numbers of the known watches. The range in serial number is greater than 48 but we cannot know whether each and every serial number in this range was used for an SAS Polarouter.

There are a small number of known examples of SAS Polarouter with case reference 20217-5. The key difference in appearance from the 20217-6 is the luminous material on the dial and hands and the minute track on the dial. As far as I am aware, there are not any examples of a 20217-5 with full provenance i.e. with the original owner being a known crew member on the polar flights. I think it is also significant that there are many examples of the 20217-5 Polarouter (and later, Polerouter) that do not have the SAS logo on the dial whereas I am not aware of another 20217-6 case reference that is not an SAS Polarouter. In my opinion, the 20217-5 SAS Polarouters are more likely to have been prototypes produced by Universal Genève before it was decided to use the 20217-6 reference as the commemorative SAS watch. 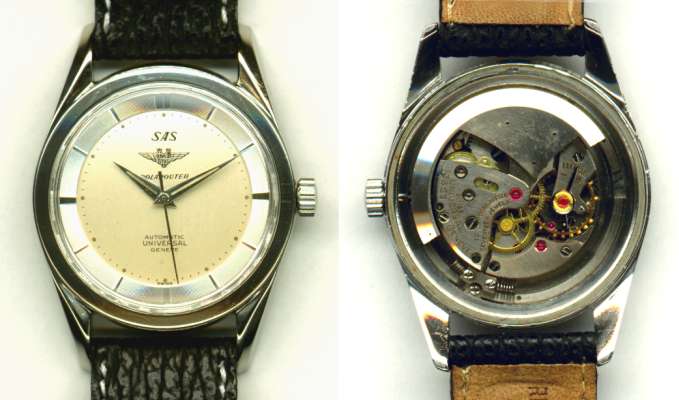 An SAS Polarouter with case reference 20217-5

There are even fewer known examples of the SAS Polarouter De Luxe pictured below. It is thought that these solid gold watches with engraved gold dials were given to the VIPs on the passenger list, which would surely have included Prince Alex and the three Prime Ministers. I know of two examples that are now in the hands of collectors and it seems slightly surprising to me that watches that were owned by Royalty or Prime Ministers would have reached the open market, at least without provenance. I wonder therefore whether these watches were issued to more of the passengers who, with the exception of the press, were all dignitaries of one type or another. 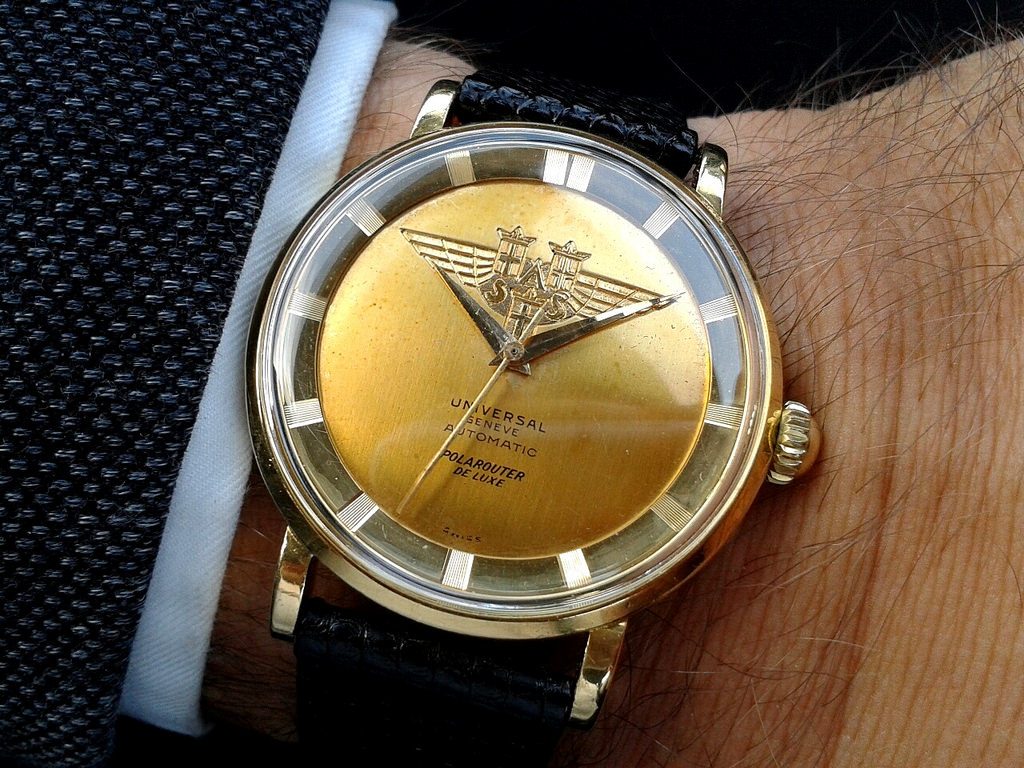 The SAS trans-polar flights make for an absolutely fascinating story, encompassing groundbreaking technological advances and the glamour of travel in a bygone age. And for me, the mystery surrounding these rare and beautiful watches, and the involvement in the design of a young Gerald Genta, only adds to the allure.